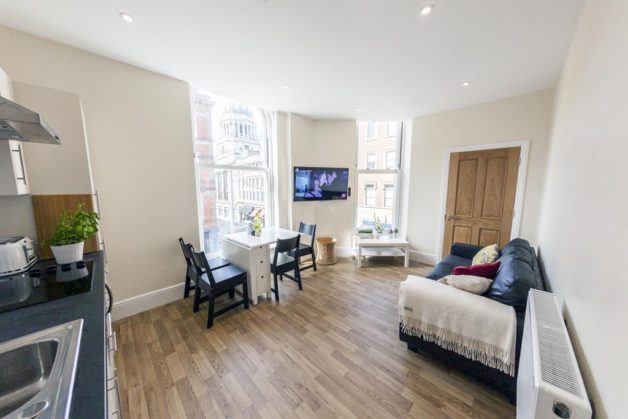 The ‘Boom’ of the PBSA

The last 10 years has seen Nottingham’s skyline transformed with a number of large student buildings developed in areas across the City Centre. Large sites such as Hydrogen on Goldsmith Street & Nova on Talbot St along with many other similar sites now provide accommodation to students in Nottingham. To put numbers into the discussion, since 2007, the number of PBSA (Purpose Built Student Accommodation) bed spaces has grown from 13,905 to in excess of 22,000.

This growth has been widely met with speculation of a dramatic over-supply with public perception as well as major institutional commentators stating that the Purpose-Built Sector is over-supplied and not fit for purpose. This perception has spawned the myth that has recently been ‘busted’.

Nottingham City Council’s planning team have conducted an annual survey for the last 4 years to monitor the impact of this sector and the results from the latest survey make for the best reading yet! The survey for the 2017-18 year has detailed the lowest vacancy rate yet at 0.5%. This is 0.5% across 22,000 beds, equating just 100 bedrooms. Not only that, the last four years has shown consistently low rates of below 2% despite the supply increasing year on year.

How are the figures so low?

These figures are great reading for developers and investors who are looking for potential sites across the UK, but how are these figures so impressively low?

Secondly, the highly restrictive article 4 directive is limiting the supply of traditional housing in areas like Lenton and Arboretum. Across Nottingham, the number of council tax exempt properties (typically, the way our council measure the number of student houses) has dropped from 7630 in 2011 to 6170 in 2016, nearly a 20% drop.

The rise in enrolment combined with tight restrictions to traditional housing stock show a clear explanation to why the PBSA sector has performed so well.

What’s next for the PBSA sector in Nottingham?

The sector certainly is not slowing down. There are 4,000 beds already in the pipeline to be delivered in the next two years. At FHP Student Living, we have been discussing various sites across Nottingham, notably including a large site in Beeston, several office conversions close to Old Market Square and sites near the Canal whilst bringing 2 new schemes to the City for September 2018.

The first scheme is The Junction at the crossing of Lister Gate and Low Pavement near the Broadmarsh Shopping Centre. We are also marketing a 20-bed site on Lower Parliament St, that is nearing 50% occupancy already! With additional smaller schemes, we expect to be bringing 75 new beds to the market September 2018, with a further 350 beds in discussion for further academic years.

What should I be developing in Nottingham?

Looking into the longer-term potential impact as the number of bed spaces increase, I would urge developers to think of how sustainable your student site would be, considering a diverse portfolio a key investment goal. Nottingham City Council are very keen to promote the continued development of PBSA’s as long as development is sustainable. The low vacancy rates support this view and consolidate the confidence of developers in Nottingham.

This confidence can be diminished very quickly however, by looking at the ‘£’ sign and over developing studio properties achieving high rents up to £250 per week, typically targeting wealthy overseas students. Overseas students make up approximately 20% of the total student population, so wider consideration of more affordable and sustainable accommodation needs to take place for the UK based student. The development of smaller clusters of 2-5 beds are desirable and more affordable for the majority of the market at an average of £130 pp pw.

These properties also act as a more direct replacement to the traditional housing stock UK students typically choose to rent outside the City Centre.

Having reviewed our stock of circa 540 beds some of the figures show clear trends and desires from the student population.

In terms of expenditure, some further interesting figures demonstrate the difference in spending powers. The below are the average annual spends for students by region.

For any further queries regarding the market, how to find and appraise a site or if you have a building in the City that you would like us to provide you with advice on, please contact Head of Student Living, Jonty Green, at jonty@fhpliving.co.uk.