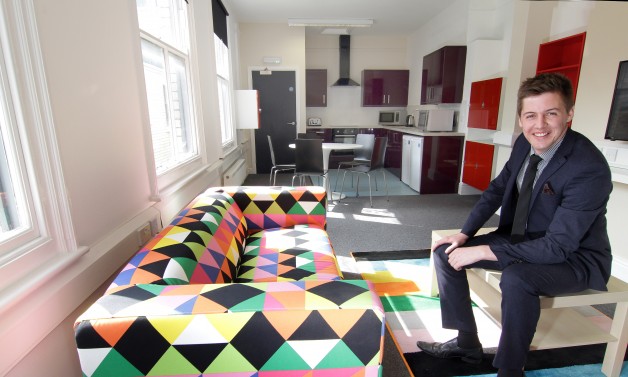 The 20-bedroom luxury student development situated in Bridlesmith Chambers has been fitted out to an extremely high specification, including flat screen TVs, sophisticated kitchen appliances and modern furnishings throughout.

Student property consultant at FHP Living Jonty Green said he was delighted with the speed at which the properties had been reserved.

He said: “We advised our client to take the speculative decision to develop this former office space into student accommodation because we saw an opening in the city centre for more luxurious and well-priced living spaces for the thousands of students at the city’s two universities.

“The combination of the excellent location just a stone’s throw from the city’s bars and restaurants, combined with the quiet and sophisticated walkway, has meant that these flats have received an overwhelming amount of interest. They were only actually completed a couple of weeks ago, but we have been getting calls and visits about them since we put them on the market in late January.

“The properties have been finished to an extremely high standard. The majority of the spacious bedrooms have en-suites and benefit from having a south facing aspect. The tall windows disperse the natural light fantastically as well. The flats are available fully furnished and with a fully inclusive package of bills – electric, gas, water, TV and internet – included in the rental value.

“A nice mixture of students have signed for the flats, ranging from first year law students to mature third year architecture students.”

Within the group of four flats, two have five bedrooms, one has six bedrooms and the other has four bedrooms.

Jonty added that the flats had some stiff competition from other high end student properties in the city centre, but that this hadn’t stopped them being snapped up in quick succession.

He said: “Competition is getting increasingly greater for both landlords and tenants in Nottingham. Landlords need to make sure they are offering high quality stock and students are keen not to miss out on the best deals and properties. Bridlesmith Chambers is really setting the standard for other developments in the city.”

Director at FHP Living David Hargreaves added: “The intense interest and rapid let speed on this development has shown us that there is certainly a thirst for high end student property in the centre on Nottingham.

“After advising our client to market this property as student flats rather than offices, we quickly brought in our sister company FHP Student Living, architect Tan Gani and the contractors and adapted the space to reflect the needs of the market.

“This development has been a great success for our team and is a nod towards a shift in direction of the student market in the city.”

The average value for one of the rooms within the apartments is £115 per person per week.

There will be more developments of a similar spec coming to the market for future academic years. Students can register their interest early by calling Jonty on 0115 9644 631.

For more information about student properties being marketed by FHP Living, go to www.fhpliving.co.uk/students.