300 Apartments planned for a Former Lace Factory on Alfreton Road 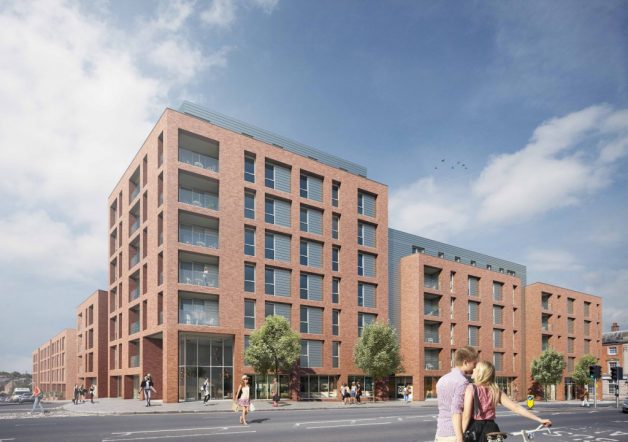 A multi-million pound housing scheme on Alfreton Road in the city could create jobs, boost the local economy and breathe new life into one of the city’s major arterial routes.

Plans to create around 300 one, two, and three-bedroom apartments and townhouses have been submitted, which could transform the former Forest Mills lace factory eyesore in Alfreton Road into housing and shops. Homes will be targeted at both sales and rental markets and on the ground floor of the building will be 10,000 sq ft of retail and leisure units.

David Hargreaves, Director of FHP Living, who has been working with the developers on the scheme, said: “Maryland has brought forward plans for a high quality major regeneration project, designed by one of the leading architects in the UK. This extends the well-established Arboretum residential and student area of Nottingham and is to be a key asset to the local community.”

The gateway site approach to the city is designed by Stephen Hodder MBE, the Sterling prize winner for architecture. Originally from Nottingham, Stephen is one of the most celebrated architects in the UK.

The site is a ten-minute walk from the City Centre and close to the city tram route. It is close to both Universities, and within easy access to the ring road and main arterial routes into Nottingham.

Maryland’s Jacob Jebreel, said: “We are delighted to be bringing forward this high quality mixed use project and look forward to progress this scheme with the local authority”.

Forest Mills, which is bounded by Alfreton Road, Boden Street, Denman Street, and Highhurst Street, was originally built as a lace factory. In 1950 Thackeray & Sons closed it down as the demand for lace declined and a failure to upgrade equipment to modern standards leading to its closure in the 1960s.

The site has been standing empty for many years, said David Hargreaves. “The scheme will plug the housing gap in the city centre and is perfectly placed for both universities, and the Queen’s Medical Centre.”